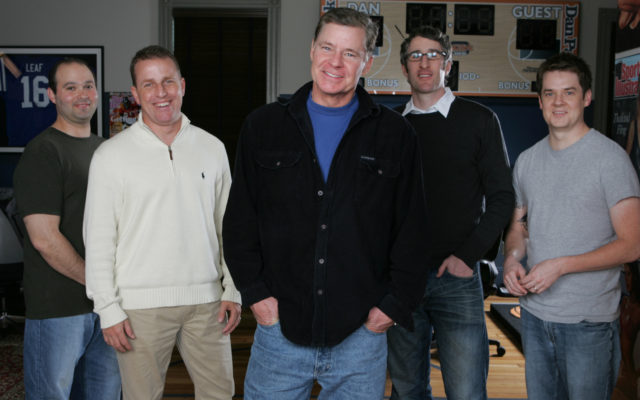 As host of The Dan Patrick Show, legendary multi-platform host Dan Patrick entertains America in morning drive along with his production staff that includes Paul Pabst, Patrick O’Connor, Andrew Perloff and Todd Fritz, known as “The Danettes.”  Airing Monday through Friday from 9 a.m. – 12 p.m. ET, The Dan Patrick Show features the most prominent A-list guests from the worlds of sports and entertainment.

Produced and owned by DIRECTV, The Dan Patrick Show reaches more than 1.4 million weekly radio listeners on more than 360 stations nationwide.  The program also airs exclusively on DIRECTV’s Audience Network and NBC Sports Network, expanding Patrick’s radio show format using Patrick’s trademark humor and interaction with “The Danettes.”  Amid the revealing behind-the-scenes antics and interstitial videos, the series is known for its unique blend of situational comedy, breaking sports news, unparalleled insider access and pop culture commentary.  By allowing viewers to see the true comedy that surrounds Patrick and his team, The Dan Patrick Show reveals the humor in sports news broadcasting while opening the locker room doors to the world of sports.  Patrick stays connected to the Dan Nation with The Dan Patrick Show Mobile App and DanPatrick.com, which features podcasts and video on demand content from the show.

Patrick was honored in 2013 by the National Association of Broadcasters with the Marconi Award for “Network Syndicated Personality of the Year,” as well as the National Sportscasters and Sportswriters Association’s “Sports Broadcaster of the Year” award for the second time – his first win in 2000 marked the second time a cable commentator received the honor.  In 1998, he received a Sports Emmy Award in the “Studio Host” category, and he’s received an additional seven nominations in the category to date.

Outside the mancave, Patrick can be seen on NBC’s Football Night in America.  He’s also a senior writer for Sports Illustrated, and has hosted NBC’s Olympic coverage in Vancouver (2012), London (2012) and Sochi (2014), and was a correspondent during the 2010 NHL Stanley Cup Playoffs.

In 2014, Patrick signed on as host of the television quiz show Sports Jeopardy!, which combines the excitement and prestige of Emmy Award® winning quiz show JEOPARDY! with the rich and diverse world of sports. Produced by Sony Pictures Television, the second season of the weekly 30-minute program debuted in September 2015 on all Crackle platforms.

Patrick previously worked as a FM DJ, a sports broadcaster in Dayton, Ohio, and at CNN Sports. For 18 years, he helped build ESPN in many roles, most notably, as co-host of SportsCenter.

Patrick received a B.A. in broadcasting from the University of Dayton. For more information, please visit www. DanPatrick.com

Connect With Us Listen To Us On